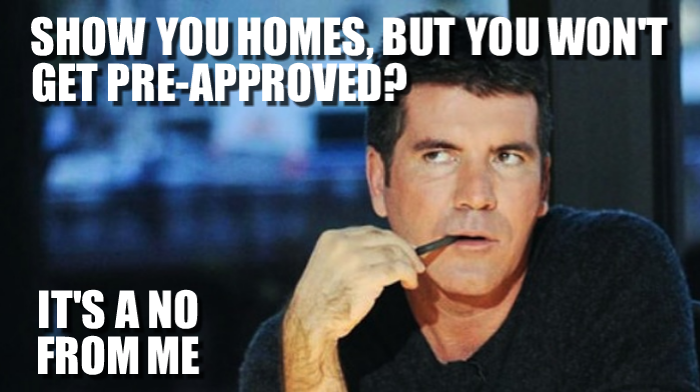 Have you ever walked into an open house, or called a real estate agent about a listing, and within minutes, they’re asking you if you are “pre-approved” for a mortgage?

If you haven’t, then you have never walked into an open house or called an agent. Or at least enough of them…

And you’re going to feel like it’s pretty pushy for them to ask that.

Try it…maybe the agent will laugh! Or, maybe not. Depends…

But every single real estate agent should be asking you if you’re pre-approved. But many do not. Because they feel like it is a bit pushy and forward. Because he or she worries about offending you. But they should ask…

…because it’s entirely relevant for them to know.

…because it’s entirely important for you to be pre-approved.

But it is not a joking matter.

And you should expect the question, be prepared to say that you are pre-approved, and…you should actually want the agent to ask you that question.

It’s not like a first date.
If you were going on a first date with someone, and one of the first things the person asked about was how much money you make, and can you afford the date, you’d feel like that was pushy and weird.

Rightfully so. You don’t go in for a kiss the minute you meet each other, let alone ask for a hand in marriage. There’s some build-up.

Beyond that, there’s some time that needs to be spent together before probing questions about finances are asked. That kind of stuff comes way after even the first kiss, because finances are a pretty private, intimate subject. Even more intimate than a kiss…

Which is why it seems so invasive when an agent you’ve just met asks you if you’re pre-approved. It feels like they’re asking you some pretty private, intimate stuff that’s none of their business.

But asking for a pre-approval isn’t like going in for a kiss. It isn’t a marriage proposal. And it isn’t probing on the part of the agent.

It is a necessary question, and an important piece of information for the agent to know. And for you!

They want and need to know that you are serious, and qualified to buy a house.

And they certainly have their reasons for wanting to know…

Real estate agents need to make sure they’re working with someone who can actually buy a house. They don’t get paid until and unless the person they’re working with buys a house. So, this is a matter of being careful about who they spend their time with. It might sound selfish…but you can’t fault them for that. They’re in business. Nobody cuts them a paycheck. And showing people houses is not a public service or charity work. Even working with someone who is pre-approved doesn’t guarantee them that they’re going to make any money. But at least it’s an indication that the person they are working with can do something.
Agents also need to know how much you’re pre-approved for in order to advise you as well as possible. Picture an agent showing you houses for weeks, and months. You finally find “the one”! You get all excited about the house, and you want to make an offer, only to find out then that there’s no way you could afford the house. This leads to heartbreak and aggravation…for both of you. It doesn’t do either of you any good to go through all of that only to find out you can’t afford the houses you were looking at…or even buy one at all.
And, to a degree, this is a safety precaution. You might not believe this, but agents are in a pretty risky position. If they just say OK to every person who calls and asks to go see a house, with absolutely no proof or verification of who the person is, that puts them at risk. Sure, a pre-approval won’t necessarily stop an evil person from doing something, but this is a pretty basic precautionary request.

Why you should want an agent to ask if you are pre-approved.
Even if you have just started browsing for a home just a little bit, and haven’t gotten pre-approved (yet)…at least expect the question. Don’t be offended when you’re asked if you are.

In fact, pay closer attention to the agents who do ask if you’re pre-approved! The ones who ask make it easy for you to find a great agent to work with.

Because if they’re asking that question, it’s a good sign that they are thorough and thoughtful about how they do their business. That’s the type of agent you want to have on your side when you’re buying a house — one who’s careful from the get-go. One who pays attention to the details. One who isn’t going to waste your time any more than their own. Or allow your heart to be broken when you fall in love with a house you can’t do anything about.

Many agents, including me, prefer that you get pre-approved through their lender. Both agent and lender understand the expectations and how each other work. It usually makes for a much smoother transaction.